ERG gene rearrangement has been identified as a highly specific alteration that is present in 40-50% of prostate carcinomas. The standardization of an immunohistochemical assay with a novel anti-ERG antibody recently described would have significant diagnostic value. The aims of this study were to identify the incidence of this rearrangement in a Spanish population and to test the specificity of immunohistochemical ERG evaluation for prostate carcinomas.

Three prostate tissue microarrays were constructed using prostatectomy specimens, and related to grade, local invasion and regional invasion. In addition to samples from malignant cases (160), specimens of prostatic hyperplasia (26) and high-grade prostatic intraepithelial neoplasia (10) were included. Tissue microarrays of 270 samples from most common malignant tumors (breast, colon, lung and bladder) were also tested. All were analyzed by immunohistochemistry.

The frequency of ERG detected in our study correlated with the results published for other Caucasian populations. Strong ERG protein expression was exclusively detected in prostate carcinomas, corroborating the specificity of ERG rearrangements for these tumors. Thus, detecting ERG using immunohistochemistry may be useful in routine practice in pathology departments.

Prostate cancer is the third leading cause of death in the Western world after lung and colorectal cancers among men and it predominantly affects elderly men. The number of deaths each year (89,300 in 2008)

[1] is increasing, in large part as a result of the rapid increase in the numbers of men reaching older ages. In Europe, approximately 382,300 new cases of this cancer were detected in 2008 [1]. Marked variations in the rates of prostate carcinoma worldwide suggest the involvement of genetic factors, and these features justify the efforts made in recent years to better understand the genetic basis of prostate carcinoma and to identify new therapeutic targets.

Chromosomal rearrangements involving the trans-membrane protease, serine 2(TMPRSS2) and v-ets erythroblastosis virus E26 oncogene homolog (avian) (ERG) loci are by far the most prevalent subtype of erythroblast transformation-specific gene fusions as detected by fluorescence in situ hybridization (FISH) or reverse transcription polymerase chain reaction. They have been identified as a highly specific alteration in 40-50% of prostate carcinoma cases [2-4]. Recent studies have described a novel anti-ERG antibody whose positive staining by immunohistochemistry (IHC) highly correlates with the presence of TMPRSS2:ERG rearrangements [5-7]. This new antibody detects the C-terminus of the truncated ERG oncoprotein, which is retained in all known ERG gene fusions that result from these rearrangements. A standardized IHC assay would have significant clinical utility because the occurrence of such rearrangements has diagnostic value. The aims of this study were to identify the incidence of this rearrangement in a Spanish population and to test the specificity of the ERG IHC assay for the evaluation of prostate carcinoma and it’s possible application in general pathology departments.

Tissue microarrays (TMAs) of a wide variety of benign and malignant neoplastic tissues were tested. To construct the TMAs, a minimum of three cylindrical cores (diameter, 0.6 mm) were taken from representative areas in the paraffin donor block for each case and were transferred, in a precisely arrayed manner, to recipient paraffin blocks (Beecher Microarrayer; Beecher Instruments, USA). Sections of 4 μm in thickness were obtained from the TMA blocks to perform IHC.

TMAs were analyzed by IHC performed with avidin-biotin-peroxidase-complex (ABC) immunoperoxidase staining using a rabbit monoclonal antibody (ERG, clone EPR3864). The ERG protein shows nuclear expression, with occasional weak cytoplasmic diffusion. IHC results were scored as negative (-), weak (1+), moderate (2+) or strong (3+) using vascular endothelial cells and lymphocytes as internal controls (Fig. 1). A case was judged to be positive if any of the evaluable cores showed positive staining, regardless of the intensity. 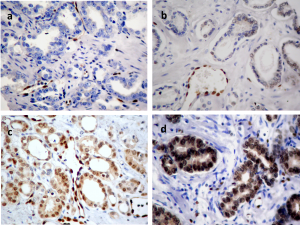 Prostate adenocarcinomas from 160 men, including prostatectomy specimens (158) and transurethral resections of the prostate (2), were used to construct three prostate TMAs. Only samples from radical prostatectomy were included in this study. The Gleason score (GS), extent of invasion (pT) and regional lymph node involvement (pN) of the carcinomas were routinely determined when possible. In addition to samples of malignant cases (160), the TMAs included specimens of prostatic hyperplasia (26) and high-grade prostatic intraepithelial neoplasia (HGPIN) (10).

TMAs of the most common tumors in Spain (breast, colon, lung and bladder) were also tested (270 samples in total).

All IHC analyses were performed with an avidin-biotin immuno-peroxidase procedure. IHC was performed on 4-µm-thick paraffin sections after rehydration. Endogenous peroxidase activity was inhibited with 0.1% hydrogen peroxide; deparaffinized sections were pretreated to induce epitope retrieval and independently incubated with their corresponding monoclonal antibody. Secondary reagents included biotinylated horse anti-mouse antibodies (Vector Laboratories Inc., Burlingame, CA) and avidin-biotin complexes (Vectastain ABC PK 4000 ST, Vector Laboratories). 3,3′-Diaminobenzidine was used as the final chromogen, and modified Harris hematoxylin was used as the nuclear counterstain. Positive and negative controls, in which the primary antibody was omitted, were included in each experiment.

Clinicopathological variables were investigated for their possible association with ERG protein expression in at least one of the cores. Categorical variables were analyzed by chi-square (χ2) tests and Fisher’s exact test for contingency tables. For all statistical tests, probability values (p-values) less than 0.05 were considered significant. Data were analyzed using the R package v.2.15.1 (©2012, R Development Core Team) [8, 9].

Patient age at the time of diagnosis ranged from 50 to 84 years (mean age 65 years).

In our study, 49% (75/154) of evaluable cases of prostate carcinoma showed nuclear ERG expression, and the majority showed strong staining (52/75) compared with the internal control. Vascular endothelial cells were uniformly and strongly positive, and lymphocytes were weakly to moderately positive.

Figures 2, 3 and 4 show the distribution of ERG IHC results according to their intensity versus the GS, extent of invasion and regional lymph node involvement, respectively. Fig 2. Distribution of the percentage of cases according to their ERG score vs Gleason score. ERG(-), negative; ERG(1+), weak; ERG(2+), moderate; and ERG(3+), strong intensity of expression.

Fig 3. Distribution of the percentage of cases according to their ERG score vs extent of invasion (pT). ERG(-), negative; ERG(1+), weak; ERG(2+), moderate; and ERG(3+), strong intensity of expression.

Fig 4. Distribution of the percentage of cases according to their ERG score vs regional lymph node involvement (pN). ERG(-), negative; ERG(1+), weak; ERG(2+), moderate; and ERG(3+), strong intensity of expression.

No ERG expression was observed in any of the HGPIN samples, although only two of their concomitant adenocarcinoma were also positive.

No ERG expression was found in any other type of tumor, with the exception of one bladder cancer sample that showed focal expression (Table 2). The primary site of this case was confirmed by IHC (CK7+, P63+, HPAP-, PSA-) (Fig. 5).

Prostate cancer is the most commonly diagnosed malignancy in men and is characterized by heterogeneity with regard to pathologic development, molecular abnormalities and clinical course. Determining the molecular basis underlying these important differences in this common disease is challenging.

In our study in a Caucasian population, half of the evaluable prostate carcinoma cases (49%) showed ERG expression. Comparable results were published previously, and the TMPRSS2:ERG gene fusion has been found in approximately half of Caucasian patients (50-52%), with a lower reported frequency in African-American men (31.3%) and an even lower frequency in Asian cohorts (15.9%) [10-13].

ERG rearrangement has been reported to be positive in 10% to 20% of HGPIN cases, always adjacent to a prostate carcinoma [14-16]. However, no ERG expression was observed in any of our HGPIN samples. The number of cases of HGPIN included in our TMAs was low (10), and only two of the concomitant adenocarcinoma were ERG positive. All HGPIN corresponded to areas distant from the malignant lesions, which were specifically selected to avoid accidentally puncturing tumor areas in the prostate TMA construction. One explanation for our findings is that ERG is positive in HGPIN only when it is adjacent to an infiltrating carcinoma, if this is the case it might be very useful when evaluating core biopsies harboring only HGPIN. Further studies are needed in order to confirm our findings.

Although ERG expression appears to be independent of the Gleason score, other authors have associated the TMPRSS2-ERG gene fusion, which highly correlates with ERG expression, with other features linked to aggressive prostate cancer [3,19], giving it prognostic value.

Also in agreement with earlier reports [5, 7, 15, 18, 20-22], our results confirm that ERG staining is highly specific for malignancy because it is rarely found in normal glands or benign conditions [21], and it will be a useful additional marker for biopsy diagnosis in combination with basal cell markers (p63 and high molecular weight cytokeratins) and α-methylacyl coenzyme A racemase [7, 15, 18, 22-24], particularly in samples with atypical small acinar proliferation or poorly represented suspicious lesions. Although poorly sensitive, ERG positivity strongly suggests epithelial malignancy in prostate glands.

The strong expression of ERG protein in epithelial tumors was exclusively detected in prostate carcinoma, corroborating the specificity of ERG rearrangement in these tumors, as reported by Schebele et al [25]. These authors were the first to assess the presence of the TMPRSS2-ERG fusion in a large collection of common epithelial and non-epithelial tumors, including more than 50 different tumor types in nearly 3000 tissue samples, by FISH. The researchers did not find ERG fusions in any of the analyzed tumors. These results, together with those shown in the present study, suggest that ERG immunoexpression could be used as a specific marker of prostate tumors and can be helpful in malignancies with an unknown primary site. Nonetheless, it should be kept in mind that ERG expression in endothelial vascular and myeloid tumors has been reported by Miettinen et al using a different antibody (CPDR ERG-MAb) [26]. We have also found a weak expression of ERG in one case of urothelial bladder cancer. This finding is important for the general pathologist in the differential diagnosis.

In conclusion, the frequency of ERG detected in our study correlated with previously published rates in other Caucasian populations. The strong ERG protein expression by IHC is exclusively expressed in prostate carcinoma, confirming the specificity of ERG rearrangement in these tumors. Thus, detecting ERG using IHC may be useful in routine practice for improving the panel of prostate carcinoma markers and the panels for metastatic carcinomas of unknown origin.

Preliminary results from this article were published as a poster presentation at the 101st Annual Meeting of the United States and Canadian Academy of Pathology (Vancouver, BC, Canada, March 2012).