The HER2/neu proto-oncogen is frequently amplified in breast cancer, and serves as a predictive biological determinant to guide trastuzumab therapy.  However, consensus has not been reached regarding the technical aspects that should be utilized to define HER2/neu status in clinical practice. The present study was conducted to address this critical issue, prospectively analyzing a large cohort of breast cancer patients (n=222) and utilizing a variety of methods. To define HER2/neu expression, detection of its encoded protein (p185) was performed by comparative immunohistochemical (IHC) studies using two mouse monoclonal antibodies (mAb CB11 and mAb TAB250).  To assess HER2/neu gene amplification, fluorescent in situ hybridization (FISH) assays with gene-specific probes were conducted.  All procedures were applied to deparaffinized tissue sections of breast tumor samples.  Data reveal that mAb CB11 had increased sensitivity and specificity (62.5% and 93.4%, respectively) when compared to mAb TAB250 (40% and 76.4%, respectively) in defining HER2/neu amplification.  Initial HER2/neu assessment by IHC using mAb CB11 we believe is an adequate strategy, providing a high predictive negative value (95.5%) for HER2/neu amplification in cases with low or undetectable p185 expression.  On the other hand, mAb CB11 has a high predictive positive value (96.2%) for HER2/neu amplification in cases with p185 overexpression. However, cases displaying moderate p185 expression have to be considered as not conclusive.  In such instance, it is indispensable to perform FISH for the assessment of HER2/neu amplification. It is also advisable to conduct FISH if there is discordance between p185 expression and the histopathological classification of the lesion, or molecular profile of the tumor.  Finally, even though the false positive rate produced by IHC assays is less than 5%, due to the toxicity and cost of trastuzumab therapy it is reasonable to consider the systematic use of FISH prior to implementation of treatment. 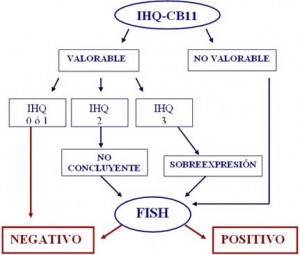